We left the Karsten http://www.hotelkarsten.de/ after a leisurely breakfast and rejoined the A559 South, joining the A3 further down, and almost pottered on down to Heissdorf. We stopped a couple of times on the way at Services that we knew were good, we marked all the services on our Europe mapbook before we travelled the first time, and any services that we stopped at we put a ring round the good ones and a cross through the bad ones.

Below are two Copies from my Facebook, What do mean that’s cheating? I’m the one on Holiday!

A3 Southbound, the Services are called Bad Camberg. Named after the nearest village it may be, but we don’t think it is Bad at all, in fact, we think it is rather good here! The only downside is the steps up to the Restaurant, the last visit 4 Years ago and I really struggled with my Knee, but this time was ok. Heissdorf tonight, a little short of Nuremberg then Austria Tomorrow. It was 23°C when we left the Hotel in Wahn-Heide this Morning at about 9:15, currently a bit HOTTER! (About 27C)

Hotel No. 2 Please The Aurora at Heissdorf https://hotel-aurora.online/ueber-uns/ …. got here ok, no Dramas. Nice surprise on arrival though, 1st-floor room facing away from the Autobahn AND Tea/Coffee making facilities provided. Ok 2 teabags, one Cammomile and one Darjeeling and Coffee whitener, but at least we’ve got a kettle and cups! Last twice we didn’t have despite being advertised, no longer advertised but provided…maybe my whinging on those review sites worked 4 Years ago? AND we’ve got a Large bed, last time it was 2 singles With Wheels! I’ll let your imagination work on what happened.

This is a lovely hotel, modern and in an ideal location for travelling, there’s an Aldi and a Rewe on the business park (and if you’re desperate a McDonalds Ugh). We’re only a short distance (relatively) North of Nuremberg here (24kM via the Autobahn) so an even shorter drive tomorrow.

The lack of Teabags and milk doesn’t stop my Julie, we bring our own! She bought a Decent travel kettle Years ago and brings a sealed plastic tub and a screw top carton of skimmed milk with us. The milk is still ok as I type this (on Tuesday Morning) and we bought it on Friday! Never Ever get in the way of us Brits and our cup of Tea! I am happy to drink decent Coffee, especially when away from home or work, but Julie has gone off it over the Years, so we always have a supply of Tea at hand, and the Spar Supermarket in the Village sells all types of milk so that’s not a problem.

Now, where was I? Oh yes… After breakfast, (we don’t go back unless they Give you a good breakfast) we departed the Aurora and picked up the A3 South again at a leisurely pace (ok, 70mph but on a road with no speed limits and a recommended speed of 130kM/81 mph that IS leisurely) and almost immediately noticed the difference.

Sunday was a day when only commercial vehicles carrying Fresh perishable produce were allowed on the roads (you see hundreds of the other Trucks parked in every rest area), resulting in quiet traffic and few needs to overtake anybody, After a Saturday of British Manic Motorways, and French, Belgian, Dutch and then German Idiocy on our first leg, Yesterday was really pleasant and the Holiday laid back feeling came on.

But Monday? That’s when ALL the Trucks in mainland Europe are moving, especially the Trans-Continentals. There were enough going South with us to warrant a few overtakes of fairly long convoys, (Didn’t see any plastic chickens though) but Coming North? Wow, there were literally Tens of Thousands of them. Amongst the ones we recognised, a handful of Eddie Stobarts, The entire convoy of the Formula 1 Renault racing team and a few trucks and hospitality units from Mclaren and Mercedes teams. I can’t take pictures and drive, and to be honest Julie hasn’t used the camera on my phone before so no pics I’m afraid. It was the Austrian F1 Grand Prix Yesterday and they’re all travelling to Silverstone for next Sunday!

Of course, we met most of the trucks going our way at hills! Bearing in mind that a lot of the lower stretches of this Autobahn are two-lane each way and no speed limit AND the drivers of big Mercs and BMWs will not slow down, coming up on a convoy takes some quick thinking. You’re travelling at 120 to 130kM/Hr 70 to 80mph, the Trucks are at a Maximum of 100kM/hr 63? mph and the overtaking lane on a busy Monday is running at about 160kM/Hr 100mph upwards.

I found the best way is to start seriously looking for a gap about a Mile 1.6kM before you meet the Trucks, keep it in your peripheral vision and only accelerate when it gets near you, indicating just before when the last car before the gap is too close to allow you in. Floor the pedal and aim to pull out so you just miss his tail end, bearing in mind that you’re driving a 1.6Litre Deisel and an eco model at that! Our Peugeot 3008 Automatic is very economical, usually giving an exceptional fuel economy but ask Her to lift Her skirts and fly, and the raised eyebrows and open mouths of the surrounding drivers is a phenomenon that I take great pleasure in. Looks like a harmless SUV, Drives like an economical SUV, got a ‘Caution Grandparent Driving’ sign in a back window and goes like a scalded cat when you ask her to, She comes as standard with the same tyres as a BMW M3 for a good reason, as you’d never get around a bend without them at a time like this (or change lanes on an Autobahn).

The traffic eased as we went further south, the biggest problem being that the Services we set our minds on for our first stop were closed for a rebuild! We stopped at a later one, not far from the border and thought we’d have a drink and a leak then fill up with Deisel and buy our vignette afterwards. I followed the signs to the Car park, only to find that getting back to the filling station is impossible here! Huffm Stuffm Puffm!!! We went in and got ourselves sorted, then I walked around and bought our Vignette from the Checkout in the filling station.

This is a peel front sticker that you put in the top left corner of your windscreen (windshield), it must be stuck there or you will get fined, it proves you have paid a Toll to the Austrian ministry of transport to use their motorways for a fixed period of time. You can get 3 days, 10 days, 3,6 or 12-month ones, we want 7 nights here including today so a 10 Day one does it. 9 Euros — not bad at all really.

The Vignette is read automatically by gantry mounted cameras at various points around the network, and if you don’t get stopped and Fined on the spot by their Police then you get a Fine sent to the registered keeper of the vehicle. They do it, they enforce it and they don’t forget.

We left the Services and drove on down through to the border, the same road then becomes the A8 in Austria and after a few miles, we took the Right fork to travel and pick up the A1 Westbound.

We stopped for Lunch at a set of Services at Lindach and very nice they were too, the time passed 2pm whilst we were there and that was the earliest we could have checked in so with less than 30kMs to go it worked out pretty well. Apart from the cost of the diesel that is, €1:55 a Litre Ahem, as the last time we filled up was in Koln at €1:22/L that came as quite a shock! I know it is on the primary East/West route through Europe, this road goes from Hungary to France but even so.

Arrived at the Hotel at about 14:45, rang the bell at reception as Thomas the owner was serving in the Bar, and he greeted us with “Hello Mr&Mrs Windsor, I wondered if it was you two when the booking came through”! It has been 4 Years since we’ve been here, and to be greeted with a friendly handshake by both Thomas and his Wife really makes us feel welcome.

A second-floor room this time, but the stairs are wide and shallow and no problem at all even with the cases. I always book a Lake View room as we get the Balcony and of course the Lake View facing West.

The first photo (Panoramic) was taken this evening into the Sun, and the other Three were taken tomorrow morning from the same place. 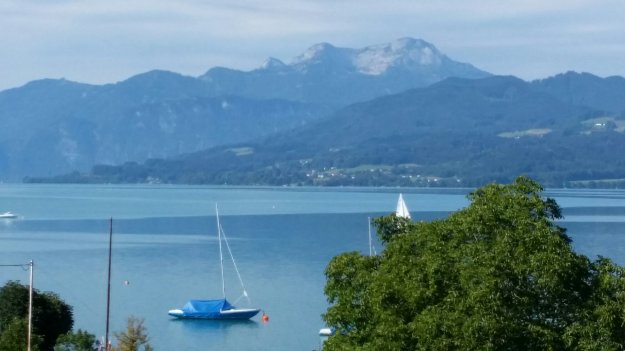 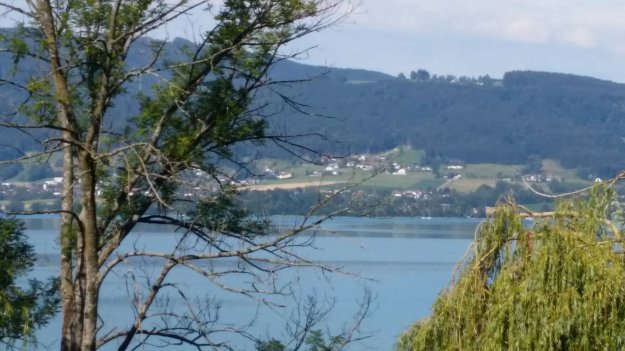 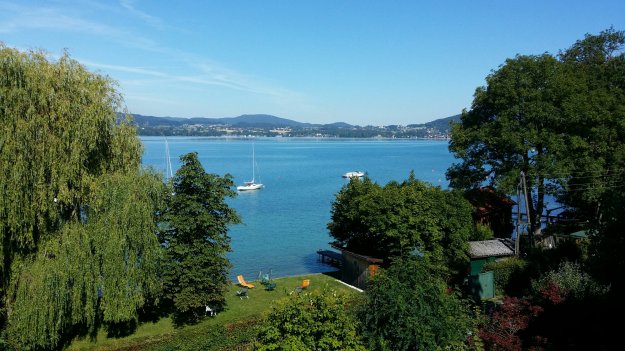 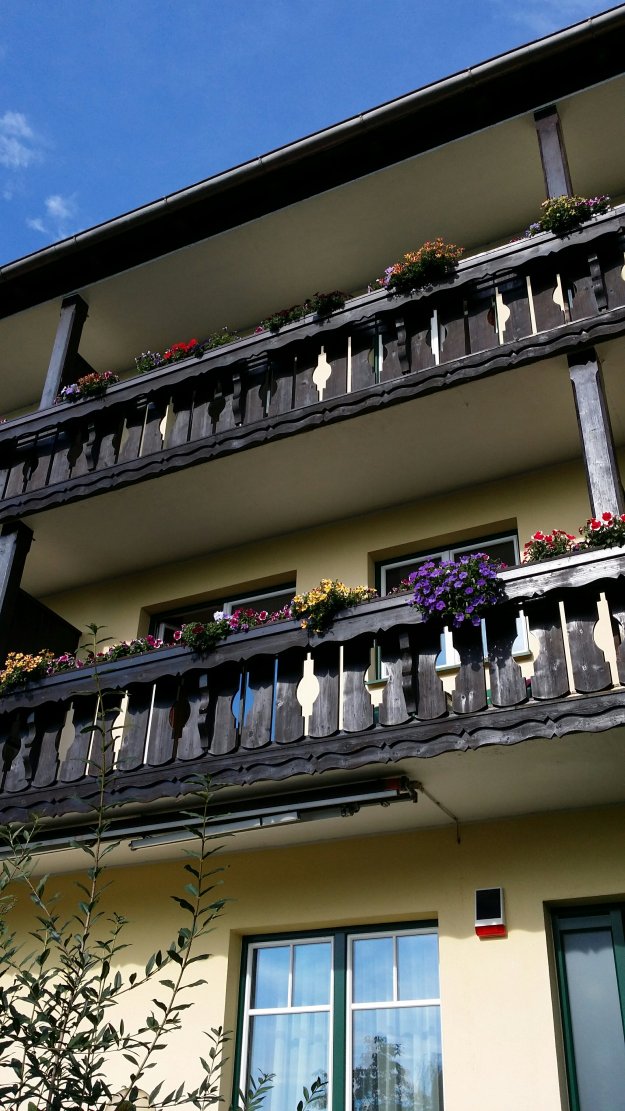 And the last one? The top balcony is ours! The picture was taken from ground level.