After our usual breakfast here, we joined the A4 Westbound from the A559 extension of the A59 Northbound, and carried on via the E314 and Then the E40 round the dreaded R0 at Brussels and onwards towards France and the Tunnel at Calais.

(We stopped for Lunch just after Brussels, we like these services, and they are at a good position.)

On arrival at Calais we were rather early, however we were not offered an earlier train for once, so went and sat in Starbucks whilst waiting for our train to be called. They called us on time, so we went and queued up in the lane and waited. Unfortunately the trains were running late due to an earlier technical fault, so we waited another half hour before boarding but got back to the UK ok.

Stopped at Cobham Services on the M25 Clockwise, had a meal and stretched my bad leg and knee. After all this driving they really hurt, my knee locked itself up over time and just after the Reigate junction I managed to stretch it out, (Not easy when it’s your Right knee and it’s your driving) so a while out stretched was essential. Carried on back to Basingstoke, arriving mid evening.

Had a really lazy day, pottered up to Sainsburys and got some food for the rest of the week, then back to Julies flat and slob out.

Left Basingstoke after 9am, M3, A303 then A30 West. Stopped for lunch at the American (Style) Diner Route303 at Newcott http://www.routerestaurants.co.uk/route-303/ , I’ve been a couple of times before but it was Julies first visit. The portion sizes really do have to be seen to be believed, I only ordered two Chicken wraps, but they came with a salad and chips, proper chips not those Mash Julienne things the fast food places give you!

Continued down to West Cornwall and my little house near Camborne, Cup of Tea and unpack, 2 loads of washing later and that was that, back to work Tomorrow.

Unpacked and hung my new ‘toy’, set the time and tensioned the weights (No electronics or springs in this genuine article, the weights are 1.5kg EACH) and it worked first time. 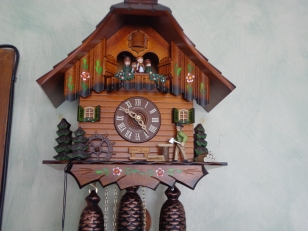 I hope you haven’t minded reading this drivel, I’ve never done a travel log as a part a Blog before, and certainly not attempted to put pictures in before so it’s been a learning curve.

Don’t know when I’ll post again, but no doubt you’ll find it or avoid it when I do!